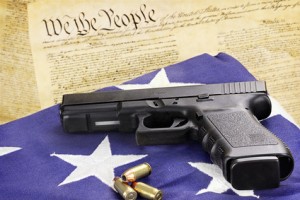 SYNOPSIS: The gun debate is raging on months after the tragedy in Newtown. With so many different political viewpoints, and the 2nd amendment to uphold, what would be a fair compromise for both proponents and opponents of guns?

I think the best way to curb gun violence without taking away guns is to restrict and regulate bullet usage. Gun owners should be allowed 6 (or some similar number) bullets for home use/protection. If they discharge a bullet, they should have to bring the used shell to a gun shop and exchange it for a new one, and fill out an incident report.

If you go to a gun range, or hunting, state governments should have ammunition kioskis at the entrance/exit of these areas. All gun users must check in when arriving, purchase and inventory as much ammunition as they’d like, and when they leave, they should return all unused ammunition and discharged shells (if it’s a hunting ground) or else incur a $500,000 / 1 year of jail penalty, or something similarly severe.

That way you don’t take away guns at all, you allow for personal protection, you don’t need to regulate private matters concerning gun owners or gun preferences, and you can still ensure mass civilian safety, curtail mass murder situations, and prevent excessive force.